In December 2008, Dr Anthony Evans and I wrote an article for the IEA asking, in these testing times for central banks, whether there is room for Austrian Ideas at the top table.

Historically there have been roughly three main ideas that explain macroeconomic fluctuations, and they can be demonstrated with a brief (and highly stylised) overview. The first to emerge stems from Vienna, with the works of Ludwig von Mises and Friedrich Hayek. This focuses on the communicative role played by interest rates, which signal to entrepreneurs the willingness of consumers to forgo current goods for the sake of greater future consumption. When central banks create monetary expansion this disrupts the signal and alters relative prices. Entrepreneurs invest due to low interest rates, but since this is not backed by greater savings the ‘boom’ is unsustainable. When inflationary pressures caused by the printing of money mean that interest rates rise, a recession is the inevitable consequence.

The second is associated with John Maynard Keynes and his followers in Cambridge, England (such as Joan Robinson) and Cambridge, Massachusetts (such as N. Gregory Mankiw and Paul Krugman). This approach shifts attention from demand or supply shocks to emphasise the frictions within a market economy that amplify relatively minor shocks into real (i.e. output and employment) effects. Issues such as price rigidity and capital market imperfections are market frictions that require aggregate demand management to overcome.

The third main idea is associated with the New Classical and real business cycle (RBC) theorists who view cyclical activity as being the outcome of random productivity shocks. Under certain assumptions supply-side shocks (such as energy prices, changes in productivity, regulations, civil unrest) alter the natural rate of output, and the economy efficiently responds.

For simplicity we label these three main frameworks as ‘Vienna’, ‘Cambridge’ and ‘Chicago’, and use doughnut charts to illustrate their similarities and differences: 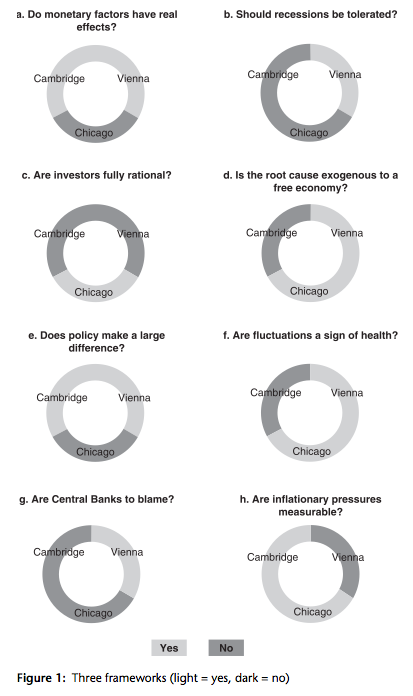 the neoclassical synthesis of classical (Chicago) and Keynesian (Cambridge) macroeconomics that underpins central bank philosophy is a necessary but not sufficient use of the ideas available. And as we shall see, current economic conditions are prompting a return to distinctly Austrian (Vienna) ideas across the mainstream media.

There seems to be an increasing acceptance amongst economic commentators that loose monetary policy has fuelled credit bubbles; a too-narrow focus on CPI has prevented central bankers from fully noticing; and the risk of a minor recession should outweigh the threat of future inflation. By providing the context for these ideas we hope this interest is extended to central bankers. In these testing times there should be an open mind for the most appropriate frameworks to influence monetary policy. There is a vacant seat at the top table, and it is time that it was filled.

We encourage you to read the whole article.

“Toby Baxendale is an entrepreneur who built up, amongst other things, the UK's largest fresh fish supplier to the Food Service sector, see www.directseafoods.co.uk, and recently sold it. Toby is dedicated to furthering the teaching of the Austrian school of economics. He established and funded the 1st Distinguished Hayek Visiting Teaching Fellowship Program at the LSE in Honour of the Nobel Laureate F A Hayek. Toby is Chairman of The Cobden Centre. Richard Cobden's timeless principles of the abolition of legal privilege of the few at the expense of the many are worthy in this day and age to promote.

Japan, an Opportunity Awaits Us

Economics for the Many

What is Right Wing?

The Protectionist Zombie Is Back

My Time for Speakers for Schools

The Selfish Gene, its Extended Phenotypic Effects and Human Cooperation

In Defense of the Euro (An Austrian Perspective)

AEP and “The Chicago Plan Revisited

Exorcising the Ghost of Ironman Zurich

The Motive Powers Of Destructionism

The Ultimate Subsidy For The Rich

Did The Savings Glut Or Massive Monetary Epansion Cause The Boom And The Bust?

Our Central Bankers Are intellectually Bankrupt